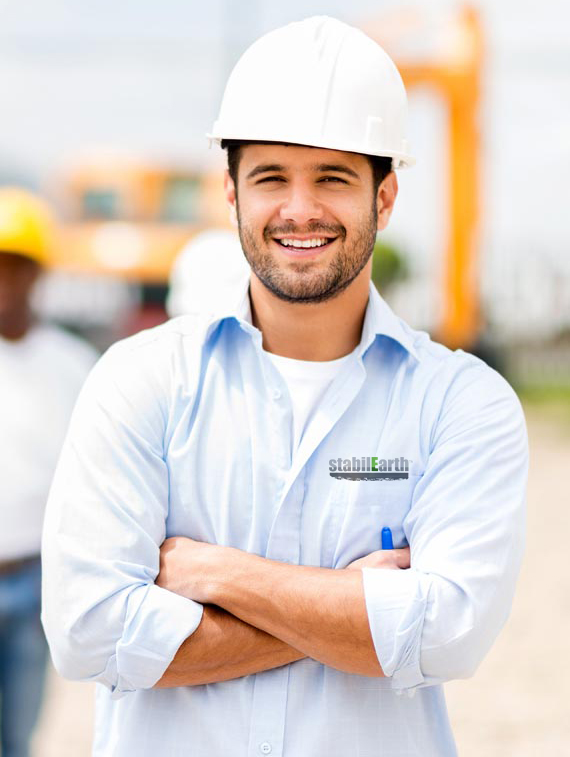 stabilEarth distributes the Condor® and Wood’s® line of products worldwide. With over 50 years of combined construction and engineering experience in a region with an abundance of clay-based soils, our founders were uniquely qualified to set up stabilEarth to explain the benefits and best ways to utilize the Condor and Wood’s products lines.

At stabilEarth our goal is to spread the word about the time- and money-saving benefits of these products and to get the products into the hands of people who need them. We are working tirelessly to recruit, train, and equip qualified applicators, sub-distributors, resellers, and commercial users of the products. Located within the Dallas-Fort Worth Metroplex, stabilEarth is close to major air and land-based shipping hubs, making this an ideal place from which to distribute products.

Today we have a very close relationship with the original product manufacturer, Earth Science Products, which owns the trade secret and patent-protected formulas for not only the Condor line but also the Wood’s line of products that we distribute. Earth Science Products was one of the first to mass produce a high quality, consistently performing ion exchange formula. Earth Science Products has nearly 40 years of experience. They are widely known for upholding high technical and ethical standards, and they have entrusted stabilEarth to make their products available to a wider audience.

stabilEarth was originally founded by engineers who were amazed to learn what the Condor products could do for the builders and homeowners in the DFW Metroplex. The Metroplex area has a very high percentage of land area where the soil has significant clay content. Such soil is extremely prone to damaging swelling and shrinking as moisture levels change with the seasons. This causes very costly problems for builders, building owners, and home owners as heaving soil cracks foundations, roadways, buildings, runways, and other infrastructure. Repairing damage from heaving soil is big business in the Metroplex.

At first the engineers were skeptical. If an environmentally friendly liquid really existed that, when injected into the soil, virtually eliminated heaving and shrinking from weather conditions… if such a product really existed.

Their investigation revealed that Condor products had been used successfully for years by people in the know. There have been international and domestic studies demonstrating its effectiveness. The products weren’t well known due to a lack of marketing effort.

Having had direct experience with the damage caused by clay-based soil in the Metrolex, our founders realized that Condor had a huge potential to prevent future damage and help remediate past damage at a greatly reduced cost. Would the Condor products really work on soils as prone to swelling as those in north Texas?

So they began testing the effects of Condor products for mediating heaving that had damaged buildings in the Metroplex area. They started by injecting the soil beneath over 100 damaged homes and numerous commercial properties, then monitored the properties for additional movements. What they found confirmed the data they had found in their research. The Condor products worked, even in the Metroplex, where the soil seemed hopelessly susceptible to swelling and shrinking with the seasons.

That’s when it was decided that someone needed to get the word out about the Condor products. A training and marketing organization was needed to educate people on the use and benefits of these incredible products. A distribution network was needed to do a better job of getting the products to the people who could most benefit from them.

And so, stabilEarth was born.